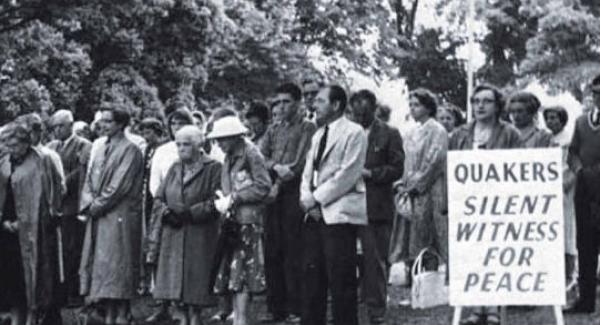 Aims to monitor international and national legislation and government policies and actions regarding matters of particular interest to Friends.

The Quaker Peace & Legislation Committee aims to monitor international and national legislation and government policies and actions regarding matters of particular interest to Friends. The purpose is to keep Quakers informed of issues by circulating briefing sheets indicating basic details and possible action by Friends locally and beyond. The committee can also make representations to government or parliament on behalf of Friends, or propose such action to the Presiding Clerk, Standing Committee or Yearly Meeting. The committee may initiate particular peace projects, including in cooperation with Regional Meetings, to enhance the involvement of Friends in peace concerns.

Quakers are asked to provide encouragement to the newly-formed all-party Parliamentary group in support of the Nuclear Prohibition Treaty.

This Alert draws attention to the urgency of protests to the new Attorney-General to drop the prosecutions of Bernard Collaery (lawyer) and Witness K (former intelligence official) under national security laws, for revealing that the Australian Government bugged government offices in East Timor during negotiations over the natural gas field development in 2004.

This Brief outlines the outcome of a recent Parliamentary report which raises challenging questions. It proposes abolishing compulsory preferential voting, adding a requirement for ID at polling booths, reducing controls on media commentary, and playing down the impact of political donations on the democratic process.

The relationship between Australia and China is at a serious point of conflict. This report describes and analyses of some of the critical factors involved, and ideas about a way forward.

This Brief looks at the trends affecting Palestine and particularly the two-state solution that has long been advocated.

The Federal Government has released its draft legislation for the creation of a national integrity commission, following many years of public debate. This Brief outlines the proposed terms for the body, and some initial reactions. It suggests action that can be taken in response.

This Brief looks at the origins of Quaker diplomacy and peacemaking, the current trends in global diplomacy, and the prospects of its re-emergence as a major means for achieving peace.

The deteriorating human rights situation in the Philippines (under the guise of a 'War on Drugs') is the focus of this brief.

This Brief refers to current legislation before Parliament to ensure that any arrangements made between foreign governments and Australian States, Territories, councils and universities are consistent with Australian foreign policy. The responses of various groups are given, and suggestions for action.

This brief outlines the range of activities undertaken by the United Nations at its 75th anniversary and the involvement and support provided to the UN within Australia and globally.

This action alert identifies the key issues surrounding the status of refugees and asylum seekers in Australia, the role of the Australian Government and organisations involved in these issues.

Urgent call for submissions to the Senate enquiry on changes to higher education fees currently in progress.

This brief covers recent Australian participation as a member of the United Nations Human Rights Council (UNHRC), and the NGO submission (endorsed by Quakers) to the Council in advance of the regular review of Australia’s human rights record.

This Brief deals with the origins and development of the Quaker Peace Testimony over the years since Quakers began as a movement in the mid-17th century in England. It points to areas of recent thought and action among Quakers, and offers ideas for personal and group witness.

This Alert refers to proposals to raise the age of criminal responsibility from 10 to 14. It is being considered by all governments in Australia.

This Brief outlines the formation and plans of the Commission for the Human Future, a group of eminent academics and scientists concerned about the many dangers facing humanity, and identifies ways in which Friends can support its vision.

This Alert draws attention to the recent legislation amending the ASIO Act, offers some analysis and comment, and gives information on where advocacy can be pursued.

Summary of the Committee's activities, for consideration at Quaker Yearly Meeting.

Secrecy and unwillingness to admit mistakes seriously impairs the accountability of government. This Brief looks at the current situation federally, the avenues for accountability and transparency, and what might be done to restore confidence in democracy.

Information for people wishing to make a submission to Parliament's enquiry into the recent bushfire crisis.

Myanmar and the Rohinga Genocide - Letter to the PM (February 2020)

The Presiding Clerk has written to the Prime Minister urging support for the International Court of Justice's findings against Myanmar's prosecution of the Rohinga people.

Letter from the Presiding Clerk to the Government expressing Australian Quaker's continuing objections to the revised Religious Discrimination Bill.

Summary of Australian submissions on a range of human rights issues to the UN Human Rights Commission meeting, Sept 2019.

Australian Quakers express deep concern at the US Government's recognition of illegal Israeli settlements in the West Bank.

The aim of this brief is to provide an update on the UN's Sustainable Development Goals and suggested topics for correspondence to, or meetings with, Members of Parliament.

Legislation is currently before Parliament to add further pressure on the ABC by extending its regional coverage without sufficient extra funding. Legislation is also foreshadowed to require ‘fair and balanced’ reporting. This Alert suggests action that might be taken.

The current integration of Artificial Intelligence (AI) is particularly concerning with lethal autonomous weapons systems without human control on the horizon. *Update to Watching Brief 19-2*

The outbreak of violent confrontations in West Papua is condemned by the Ecumenical Forum of Churches in Papua in this statement, along with a letter of support from the Quaker Presiding Clerk to the National Council of Churches in Australia.

This Alert draws attention to the recent Pacific Islands Forum and the concerns of Pacific nations about how seriously climate change is affecting them and their future. It suggests action within Australia to support those concerns.

This is an update on Watching Brief 17-1 about social defence. A book has now been published by Jergen Johansen and Brian Martin on the subject, and this Brief covers their analysis and ideas about how a nonviolent approach to defence could work in our world.

This Alert follows recent nonviolent demonstrations in West Papua for a vote on independence. It draws attention to an appeal for outside support for the people there in their struggle for self-determination after many years of Indonesian rule.

The perils facing those who reveal information that the public has the right to know are highlighted by recent raids on journalists and prosecution of whistleblowers. This Brief outlines the legal situation and offers ideas on possible action.

Federal Parliament has now passed laws to give the Government power to deny Australian citizens (from 14 upwards) who are living in camps in Syria, having been involved with ISIS, the right of re-entry to Australia for up to two years. This Alert explains the current situation, the legislation, and possible responses.

Tensions between the US and Iran are escalating. It is time for all who work for peace to speak out against this possibility. This Alert offers some background and points that can be taken up with our political representatives.

Summary of Ministerial and bureaucratic changes made following the recent election of the Morrison government.

QPLC is re-issuing our 2013 Watching Brief on BDS, with a short update, to contribute to the AYM discernment process with regard to Quaker withdrawal from any investments which might support Israel's occupation of Palestine.

Quakers have for many years had a presence at the United Nations to contribute to its multilateral peacemaking role. This Brief outlines the current work of QUNO and how Australian Friends can keep in touch.

The emergence of new technology in autonomous weapons systems ("killer robots") raises many issues. This Brief outlines the current trends and how Australian Friends might respond.

Human rights defenders are people who act to promote or protect human rights. They can be journalists, environmentalists, whistle-blowers, and so on. Margaret Clark of QPLC attended a DFAT human rights forum for NGOs, and she reports on the background to that work and the emerging challenges, and action being taken.

The Australian War Memorial has become a focus for considerable concern as it seeks substantial expansion of its museum spaces. This Alert outlines the plans and the responses and suggests ways to follow up the issues involved.

This Alert summarises the legislation passed by the Parliament in February facilitating the evacuation of refugees from off-shore detention to Australia on medical grounds - legislation which was bitterly opposed by the Government.

The United States has pulled out of the Intermediate-range Nuclear Forces (INF) Treaty with Russia; the Presiding Clerk has written to the Prime Minister expressing Quakers' regret and dismay at this action and asking that he urge the US to reverse the decision.

Summary of decisions passed at the ALP National Conference of interest to Quakers.

The ALP's support for the treaty to ban nuclear weapons is welcomed in this letter to Bill Shorten.

This letter argues against the Government's revised policy of recognising Jerusalem as Israel's capital.

The armaments industry pervades many areas of political and economic/social life today. This Brief looks at the implications for teaching and research at our universities, and suggests questions that need to be raised.

The International Criminal Court has been in the news lately. This Brief looks at the origins, activities and shortcomings of the Court and examines the ways in which it might be strengthened.

Recent moves by the US President to establish a Space Force represent a significant challenge to the peaceful uses of outer space. This Brief looks at current trends and identifies issues relevant to the peace movement.

The US Government has decided to cut funding support for the UN Relief and Works Agency (UNRWA) within 30 days, with severe consequences for Palestinian refugees, some of the most marginalized people.

Letter to the Prime Minister re: Uluru Statement from the Heart

The Presiding Clerk has written to the Prime Minister expressing Quakers' disappointment at the federal government's poor response to the Uluru Statement from the Heart.

Media Release on the Proposed Expansion of Australia's Arms Trade

Summary of three pieces of legislation designed to curb foreign influence in Australia's affairs, and Quaker concerns about them.

Text of the statement by US President Donald Trump and North Korean Chairman Kim Jong Un after their summit in Singapore, and reporting of the reactions of world leaders to the summit.

This submission to the Joint Standing Committee on Foreign Affairs, Defence and Trade Inquiry into Australia's Aid Program outlines Quakers' approach to the issue of aid and responds to the Inquiry's specific terms of reference.

Statement to Religous Freedom Inquiry (May 2018)

Oral statement by David Purnell in support of the Quaker submission to the Religous Freedom Inquiry being conducted by the Joint Standing Committee on Foreign Affairs, Defence and Trade.

This Alert follows one in July 2016 on this subject (16-07). There have been recent moves to increase pressure to water down gun laws in Australia. A summary of this is given, along with suggested action in response

This Brief is based on a workshop held by QPLC in Canberra in late March 2018, attended by 20 Quakers from around Australia. The workshop took the nuclear weapons ban treaty as a focus for lobbying politicians at Parliament House on 27 March.