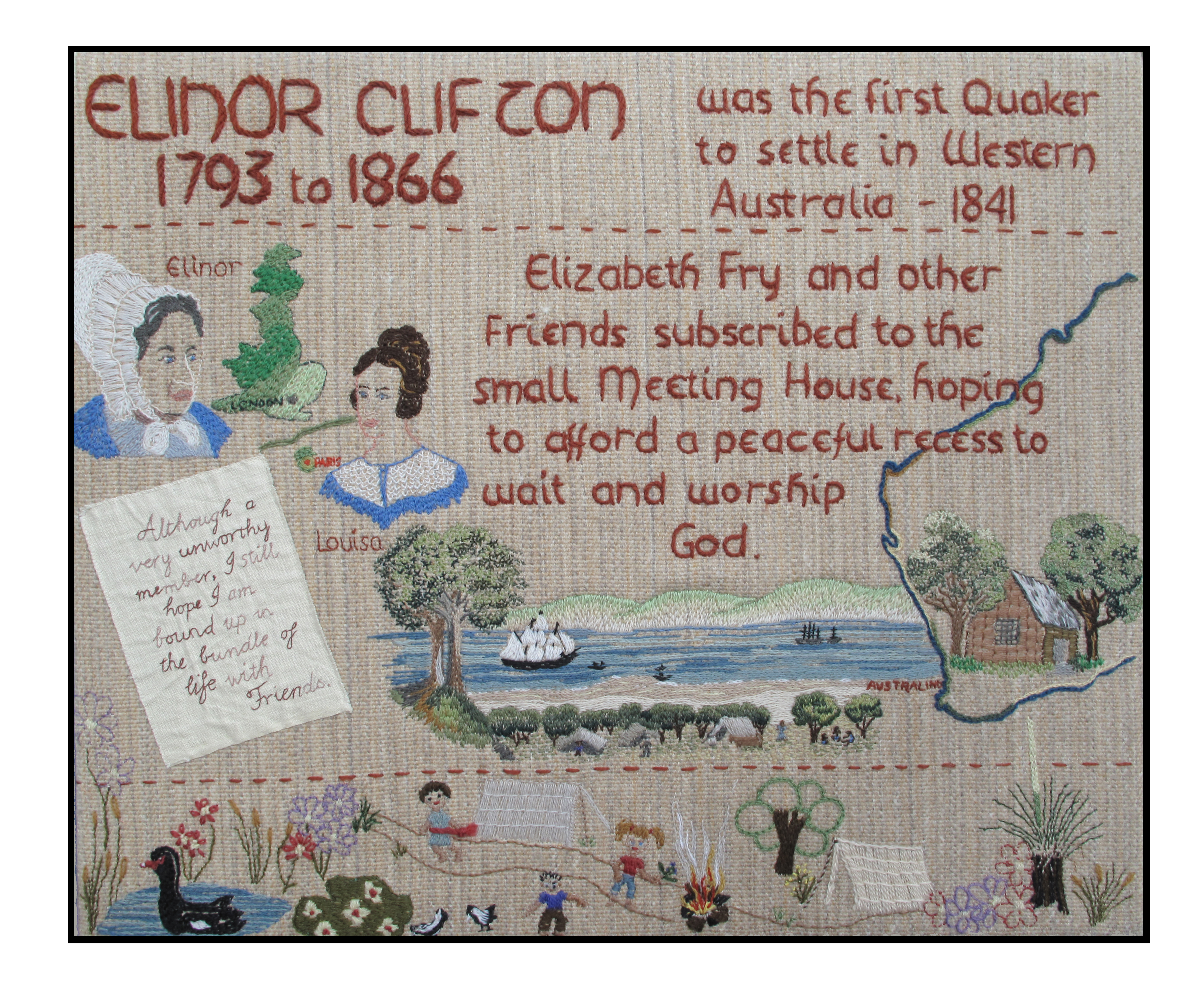 Elinor Clifton née Bell, wife of Marshall Waller Clifton, arrived at Australind in the then Swan River Colony in 1841 with her husband and thirteen  of their fourteen children. Born into an English Quaker family, she was first cousin and friend of Elizabeth Fry with whom she corresponded.

Elinor was determined to assist her husband, (not a Quaker,) and her children, succeed as pioneers, and had a steadfast resolve to maintain her Quaker heritage and faith. Consequently, she always wore Quaker grey and kept to the then Quaker habit of using thee and thou when speaking.

Once mistress of a five story house in London, life in a tent in the Australian bush must have been a severe trial. Elinor did not complain and reminded her eldest daughter Louisa: “adverse sentiments were not the way of Friends”.

Elinor had soon begun holding Quaker Meetings and hoped others would join her. She was inspired and encouraged by Elizabeth Fry and Friends in the Society, who arranged delivery of a prefabricated Meeting House shipped from England. This tiny building was erected at Australind and Elinor regularly worshipped there.

However it was solitary worship. None of those around her became more than very occasional attenders, and yet Elinor’s Quakerism had a positive effect upon the settlement.

She believed girls, as well as boys, were entitled to education and her daughters were also instructed in the practical necessities of running a household. All her children were taught the significance of truth, simplicity, peace and the responsibilities inherent in community life. She encouraged Louisa when she expressed a desire to provide lessons for the children at Australind, even though no permanent arrangements could be made.

Elinor corresponded with Friends in Hobart and her London Yearly Meeting membership was transferred to the Van Diemen’s Land Meeting.  She also kept in touch with Victorian Friends.  Frederick Mackie and Robert Lindsay visited her in 1855 during their visit to the Australian Colonies.

The Clifton family endured difficult times and Elinor kept a watchful eye on their financial position, but in 1847 her husband was able to build a substantial home. Once planned as a house for Elizabeth Fry, the bricks had been shipped to Australia as ballast.  No doubt Elinor was grateful for this improvement on tents and bush huts.

Elinor Clifton died in 1866 and is buried in the Australind Pioneer (Mt Claremont) Cemetery. Her descendants number in the thousands.

Thanks to Lesley Barker for her research – also to Charles Stevenson for his help and  for a copy of the Obituary published in the English THE FRIEND 1/7/1866.

Description of the Panel showing Elinor Clifton as the first Quaker to settle in Western Australia.

1.  The portraits shown – of Elinor and of Louisa Clifton were sourced from William Oat’s book ‘A Question of Survival’ and from George Russo’s ‘A Friend Indeed’

The two are shown with a map of England and France to depict their attachment to London and Paris and the lives they had been leading before they left their “beloved England”.

2.  The embellished quote is from a letter that Elinor wrote to family and Friends in response to an “Address to the Colonists of Australind”.  The subscribers to the Meeting House that was destined for the use of the Settlers hoped that this small wooden house would afford a “peaceful recess to wait and worship God”.  The drawing of the small Meeting House was probably by Ellen Clifton – another daughter.   The picture of the Leschenault Inlet is adapted from a sketch by Louisa Clifton in the Collection of the Art Gallery of Western Australia.

3.  The bottom part of the Panel was interpreted from a design drawn by some of the children of Western Australian Regional Meeting.

Designed and stitched by Tricia Wood. 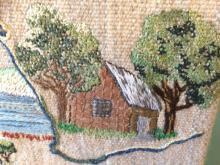 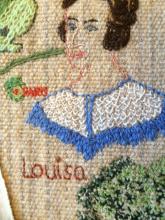