In the lead up to the UN Climate Change Conference COP26, it is critical for Australia to play its part in global action to address climate change. Churches across the world have been vocal advocates for climate justice to protect lives and ensure a sustainable future for our common home.

NCCA invited Australian church leaders to add their signatures to an Open Letter to our Prime Minister Scott Morrison urging Australia to “pursue a path that gives the greatest hope for the future of God’s creation.”* This was an opportunity to combine the voices of Churches in Australia and the Pacific to speak together at this critical time. There are four key asks, including committing to a much stronger emissions reduction target by 2030 and net zero by 2050.

Ann Zubrick, our Presiding Clerk, has signed on behalf of Quakers in Australia.

In addition, hundreds of letters calling for greater action on climate change have been delivered to Australian Prime Minister Scott Morrison's office in Canberra as part of an interfaith initiative.

Under the campaign coordinated by the Australian Religious Response to Climate Change, the more than 600 letters call for the Morrison Government to submit higher emissions reduction targets to negotiations at the UN Climate Summit in Glasgow, Scotland, this November, to re-start contributions to the UN Green Climate Fund, and to abandon a "gas-led recovery" in favour of job creation in low carbon industries.

*To read the entire article about the Open Letter in Sight online magazine go here.
Over the weekend, Quakers around Australia participated in #Faiths4Climate actions in Canberra, Sydney, Melbourne and Perth. Actions in Hobart were postponed, but will be held in the coming weeks.
Victoria regional Meeting (photos: Bruce Henry) 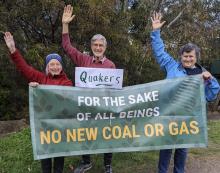 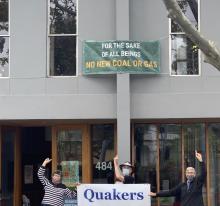 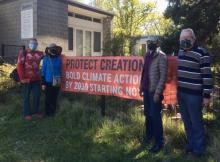 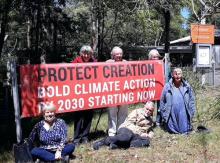