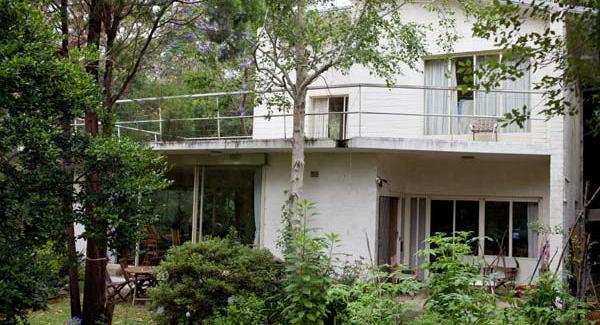 manages a residential property in Sydney which is one of our investments.

The Sanctuary Committee manages the property bequeathed to Australia Yearly Meeting by Hanna and Rudi Lemberg in 1998.

The Sanctuary property is located in Wahroonga on the upper north shore of Sydney opposite a Council controlled park which adjoins a National Park. The house is located at the rear of the Wahroonga Meeting House in a beautiful, tranquil setting of 3,850 square metres in area.

The Sanctuary was bequeathed to the Religious Society of Friends by Hanna Lemberg. Hanna and her husband Rudi Lemberg were refugees from Nazi Germany who fled to England in 1933, where they first met Quakers. They came to Australia in 1935 after Rudi was appointed director of the Research Biochemical Laboratories at Royal North Shore Hospital. Hanna Lemberg was a textile artist whose works are held in the National Museum in Canberra.

In 1953, the Lembergs built The Sanctuary. The house was designed by Hugh Buhrich, also a German refugee, in the Bauhaus style, which was unusual for Sydney.

Hanna and Rudi were inspired by the native bush on their block and, over the years, the bush garden was supplemented with non-native plants such as orchids and camellias. By the 1960s Rudi had labelled all the plants and trees in the garden so that visitors could learn about them as well.

In 1956 Hanna and Rudi joined the Quakers, and held Meetings for Worship in their house. They gave the front part of their property to establish the beginnings of Wahroonga Quaker Meeting and, with the prize money that Rudi was awarded by Encyclopaedia Brittanica for his research, the current Friends Meeting House was built in 1966.

‘There was much that appealed to us in Friends, both in their form of worship and their actions; the idea of the unity of faith and life, their sober mysticism, the seeking and exploring (which, like that of the scientist, does not expect to find final truth – static and ultimate or complete truth), the quiet time for meditation, their practical humanism, their acceptance of the stranger and of strange ideas.’

Rudi died in 1975 and Hanna died in 1998, aged 98. The Lembergs did not have children, and the property was left to Australia Yearly Meeting. Currently the property is leased by private tenants, with the bushland surrounding it regularly maintained.