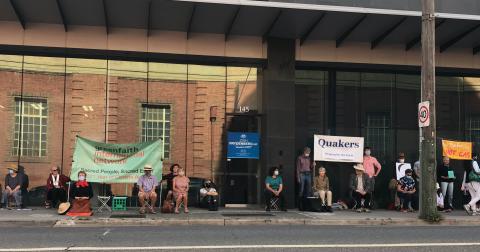 Quakers and Buddhists (from the Melbourne Buddhist Centre) hosted a multi faith action outside the Hawthorn office of the Federal Treasurer, Josh Frydenberg.  We called our action 'People of faith - Praying for Life' and as part of the action, we produced a flyer that helped particpants understand the event and the background, it included part of the AYM Earthcare Testimony, a copy of the flyer is available here People_of_Faith-flyer.pdf

Our Co-Clerk, Bruce Henry, spoke about our Earthcare Testimony and why we are taking this action:

Quakers living in Lock-down in Victoria

(Issac Pennington, 1667, during the time of the great plague)

The Victorian Quaker Outreach team have produced a video for World Quaker Day in 2020.

The Team asked several Friends how they have managed during this time of lockdown.

The video will open in a new window 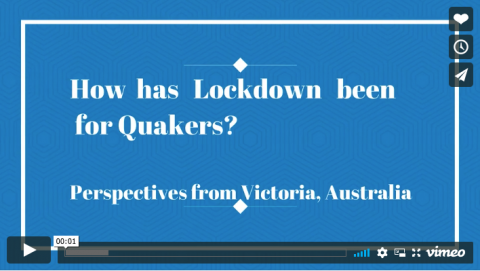 Quaker Silent Vigil - Justice for the First Peoples of Australia 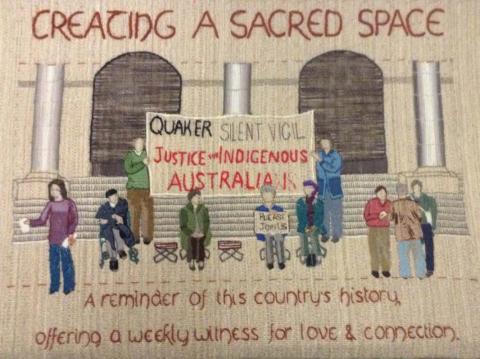 The Quaker Silent Vigil  supporting Justice for the First Peoples of Australia originated in 1997.   It has met on the steps of the Old GPO building in Bourke Street Mall each Monday for over 21 years.

It is a silent witness:

- to the past and present injustices that are experienced by Aboriginal and Torres Strait Islanders,

- to the need for treaties between non-Aboriginal and the First Peoples; the land has never been ceded.

The first Vigil took place on Monday, 19th May, 1997, shortly after the reversal by a newly-formed Government of the proper recognition and respect for Aboriginal and Torres Strait Islander People.   This tragic situation continues today. Now we see the need for acceptance by government of the Uluru Statement From the Heart, and the inclusion of an Aboriginal Voice in the constitution.

A small number of committed people, mostly Quakers, still meet in the Mall for an hour in silence each week.

The banner on display at the Vigil originally said: “Quaker Silent Vigil supporting Justice for Aboriginal Australians”. In 2002 ‘Aboriginal’ was replaced by ‘Indigenous’; then in 2012 ‘Indigenous Australians’ became ‘The First Peoples of Australia’ when Australia-wide Aboriginal and Torres Strait Islander people expressed clearly their preference for distinctive recognition of their Nations.

Over the years holes have been made in the banner by many hands taking turns to hold it, and they have been lovingly and firmly patched. 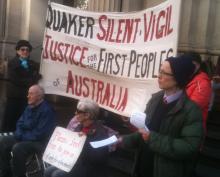 The Vigil has folding stools and a placard saying: “Please feel free to join us …. even if only for a few minutes”.  And quite a few people do.

The leaflet is the Vigil’s voice and explains why we turn up. Thus it states that we respect the Elders, and the expertise of Aboriginal and Islander People. It mentions the Stolen Generation, the 2008 Apology, sovereignty and the possibility of treaties. Importantly, it says that “we believe that only through a reconciliation which celebrates diversity and demands justice can we live in mutual respect, knowing we are all one in spirit”.

The wording is revised from time to time (eg. after the Apology in 2008), and it incorporates the ideas of 1 or 2 different Elders who are consulted. (See the leaflet wording in a separate document).

The leaflets are held so they can be taken by passers-by. The holder of the leaflet is the Vigil spokesperson, who answers questions and discusses issues if appropriate.

There has been a great deal of positive feedback from passers-by about the Vigil. Many people express thanks, spoken or unspoken, or give the thumbs up. Aboriginal People have often expressed gratitude for the Vigil. Every week one or two people will engage the leaflet person in discussion; there is a small minority who express points of view which are different from ours, mostly polite and some not so polite.

Quakers and non-Quakers are very welcome to join in this Silent Vigil, any Monday, between 12 noon and 1 pm, on the old GPO steps.

The vigil is held every Monday outside the old Melbourne GPO on the corner of Bourke and Elizabeth streets, 12 noon to 1PM.

The Leaflet prepared by the Meeting can download here: Quaker Silent Vigil.pdf