In 1833 James Backhouse and George Washington Walker walked through the forests of North West Tasmania. Backhouse described these magnificent forests in his Narrative of a Visit to the Australian Colonies. Reading his detailed description today, and recognising what has been lost, fills us with wonder.

The north west coast of Tasmania was one of the last parts of Tasmania to be settled by Europeans because the forests were so dense and impenetrable. During the gold rush the forests started to be cleared and timber was taken to Victoria to build Melbourne.

The Tasmanian community is passionately rent by questions of the environment. On the one hand, there are those who struggle to save our unique environment and on the other, those who want to use the resources to meet the demands of an economically disadvantaged state.The battle over the forests, particularly since clear-felling for wood-chips began in the 1980s, continues to bitterly divide the community.

Quakers reflect the attitudes of the general population. In the battle to save Lake Pedder, where the Tasmanian environment movement was born, Quakers were split. Similarly, in the battle for the Franklin River, Quakers protested and other Friends opposed them, afraid of job losses.

Gradually however, along with other churches,  Australian Quakers grew increasingly conscious of our spirit led need to work for environmental protection. By 2008 the Australian Yearly Meeting had adopted the Earth Care Statement, affirming our connections with ‘the grace of creation’ and committing ourselves to transformative change.

We seek to mend what has been hurt, and to strengthen our courage to discern and bear witness to this spiritual care for the Earth.

In 2011 the tiny Devonport Meeting felt led to join the battle to protect the remnants of the very forests which Backhouse and Walker had walked through in the 1830s. They joined a community peaceful protest against the  proposed Tamar Valley Pulp Mill, making a banner and providing a Quaker presence at this event.

At the top of the panel is the banner carried by Devonport Quakers.

In the centre we see the temperate rain forest as described by Backhouse:  tall stringy bark eucalyptus, sassafras,(Atherosperma moschatum), Tasmanian waratah (Telopea truncata). In the centre between the tree ferns (Dicksonia antarctica) we see Backhouse himself, crawling along a fallen log, examining the mosses and fungi. This picture is based on one of Backhouses own drawings in his Narrative.

The words at the bottom of the panel are from Backhouse’s Narrative and were chosen because they express the concept that north west Tasmania was ‘one vast forest’.

Designed and being stitched by Sally O'Wheel. 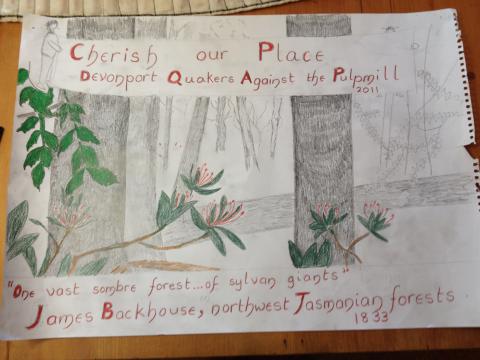