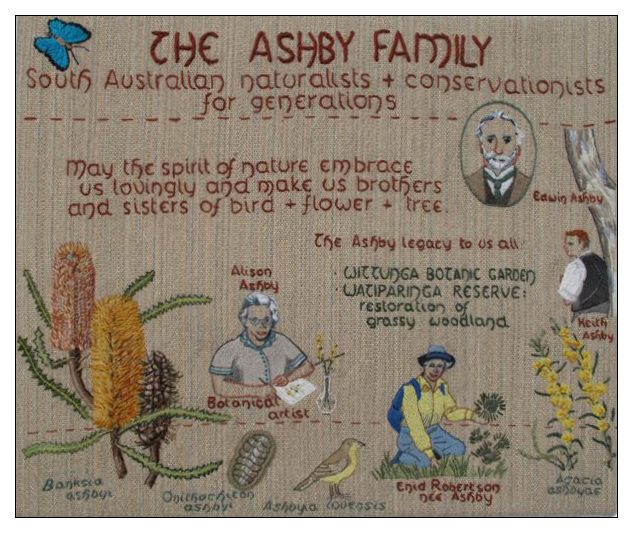 Edwin Ashby (1861-1941) came from a long established English Quaker family. He migrated to Adelaide, for the good of his health in 1888. He married Esther Coleman, from another Adelaide Quaker family and together they raised generations of Australain naturalists.

He studied and collected plants, birds and shells and regularly contributed to scientific and botanical publications.  He was a world authority on chitons, (a small sea mollusc). His chiton collection is held by the South Australian Museum and his shell collection and part of his butterfly collection are held by some of his great grandchildren.  On the panel the gibber bird, chiton, banksia and butterfly point to some of his natural history interests.  Edwin also worked to preserve wildlife parks such as Flinders Chase on Kangaroo Island and Chauncy’s Line Reserve.

Edwin’s children, Keith (1896-1971) and Alison (1901-1987), were both particularly interested in Australian native flora.  In 1965 Keith Ashby and his family donated the Wittunga house and gardens that Edwin had built and Keith and Alison had improved, to the Adelaide Botanic Gardens.

Alison Ashby donated the grassy woodland reserve known as Watiparinga to the National Trust in 1957.  Alison propagated, planted and distributed thousands of Australian plants in her life time.  She also provided cut flowers for a continuous display at the South Australian Museum to ‘educate the public’ about  the beauty of our native flora.  Alison was a largely self taught botanical artist and as a child vowed to paint ‘every Australian wildflower’.  About 1400 of her paintings are held by the State Herbarium. The wattle on the panel was named after her as was the Solanum ashbyae.

Enid Robertson, Keith Ashby’s daughter, was active in the maintenance and management of the Watiparinga reserve and tireless in her work to eradicate weeds and restore as much bushland as possible back to its original state.

The Ashby Family and the May Family (featured in the Joseph and Hannah May and Family panel) were related.  Edwin Ashby’s mother in law, Lucy Coleman (née May), appears in the May family stitching as one of the young women chatting on the right.  Lucy May was the youngest of the May children.    Her daughter, Esther Coleman, married Edwin Ashby. 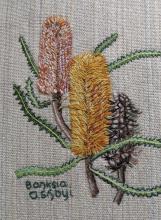 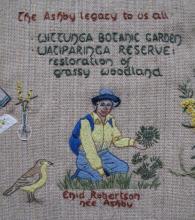 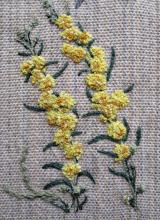