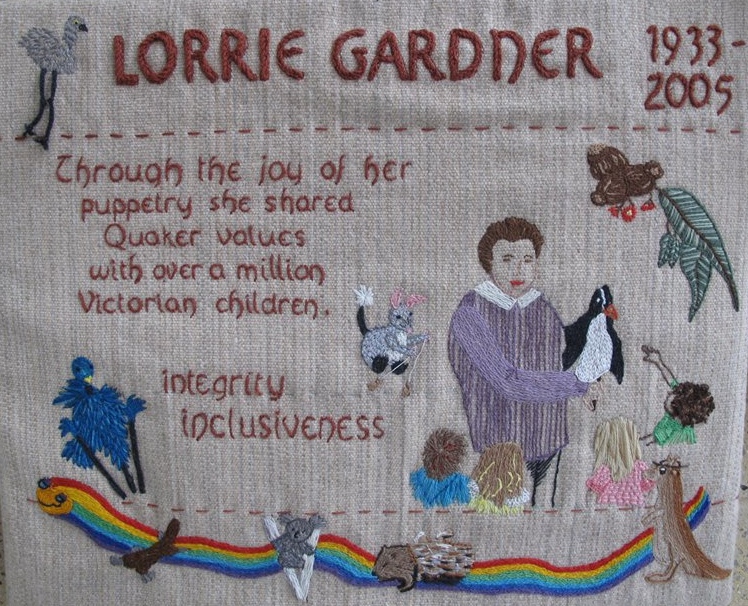 The Testimony to the Grace of God in the Life of Lorrie Gardner was read at YM 2006 and inspired Joanne Black to design this panel. Lorrie Gardner was a puppeteer whose Quaker values  shone through the stories that she wrote and the dedication that she gave to her puppetry. The Gardner Puppet Theatre which she founded was part of the experience of growing up for thousands of Victorian school children over the past thirty years.  Lorrie was born on 1 February 1933 to a Baptist family in New York. She was introduced to Friends, firstly by living in Pennsylvania, and secondly by her philosophy teacher at Cornell University, Edwin Arthur Burtt, who described himself as ‘both a Buddhist and a Quaker’.

After marrying Harry Gardner, the couple decided to resettle in Melbourne. They began to think about puppets for their son, Henry's third birthday and produced their first show called Wombi after Henry's friend ‘s dog.
When their three children were all of school age, Lorrie sought to return to chemistry and began to study her textbooks. About this time a visiting English Quaker puppeteer, Dora Beacham, stayed with them and shortly afterwards Lorrie threw her text books on the floor and said, ‘I'm going to become a puppeteer!’
Thirty eight years later, Harry's search of family records showed that Lorrie performed to over a million children in mainly Victorian schools and kindergartens and spread a message of gentleness and courage through her many puppet plays.

At her peak Lorrie, with her long-time colleague, Ralph Baker, did more than 500 shows per year. She embraced themes that were current and topical. Her longest-running shows were those where indigenous issues and/or environmental concerns were expressed. In her later years, Lorrie's contribution to puppetry was formally recognised by election as the Australian branch president of the Union Internationale de Marionette (UNIMA). After retirement on health grounds Lorrie was presented with the UNIMA Australian Lifetime Achievement Award in January 2005.

Lorrie was colourful, fun-loving, generous, very caring, loved children, could shop till she dropped, had a unique laugh and the most wonderful smile.
Live adventurously. When choices arise do you take the way that offers the fullest opportunity for the use of your gifts in the service of God and the community? Let your life speak.                                  (Advices & Queries No. 27.) 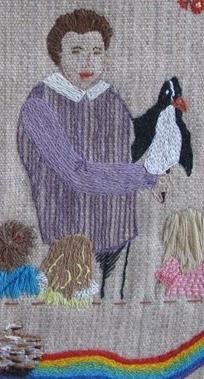