The Story of The Quaker Shop

In 1968 some of Adelaide’s Quaker women decided to raise money to help civilians affected by the Vietnam War by selling second-hand clothes and goods from a stall in a church hall. Within a few months, motivated by Ngaire Thorp and a dedicated band of helpers, they had rented and moved to a small shop on Kensington Road in Norwood.  When larger premises nearby were put up for sale it was decided to take a deep breath and buy the building.  So with faith, and financial help from some Friends, 52 Kensington Road, Norwood became The Quaker Shop, under the auspices of the Adelaide Local Meeting. With the end of the Vietnam War and the beginnings of Quaker Service Australia it was decided that the money raised by The Shop should now go to support QSA’s projects in India, Africa, South East Asia and the Pacific region.

More than fifty years on, The Quaker Shop has long been a loved neighbourhood institution in the South Norwood area.  It has helped to clothe three generations of customers, made many friends (and some Friends), and provided a warm and accepting environment which has nourished both customers and helpers. Along the way it has raised hundreds of thousands of dollars for Quaker Service Australia. For many people it is the face of Quakers in South Australia, the op-shop that “serves with love”.  Over half the current helpers are not Quakers, but have been drawn in by what they see and experience in The Shop.

In the panel the group of five people on the viewer’s right depicts some of the Shop’s many helpers, and is representative of those who have happily given of their time and expertise over the years.

At the bottom left is the Quaker Star, a well  known symbol of Quaker Service throughout the world. Balancing it on the right is The Quaker Shop’s unofficial symbol, a tangle of coat hangers.

The quotation at the bottom of the panel hangs in the helpers’ area of the Shop. It is from the Indian poet Rabindranath Tagore, and says, 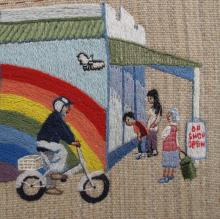 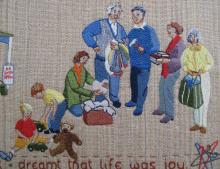 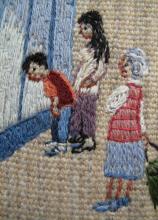