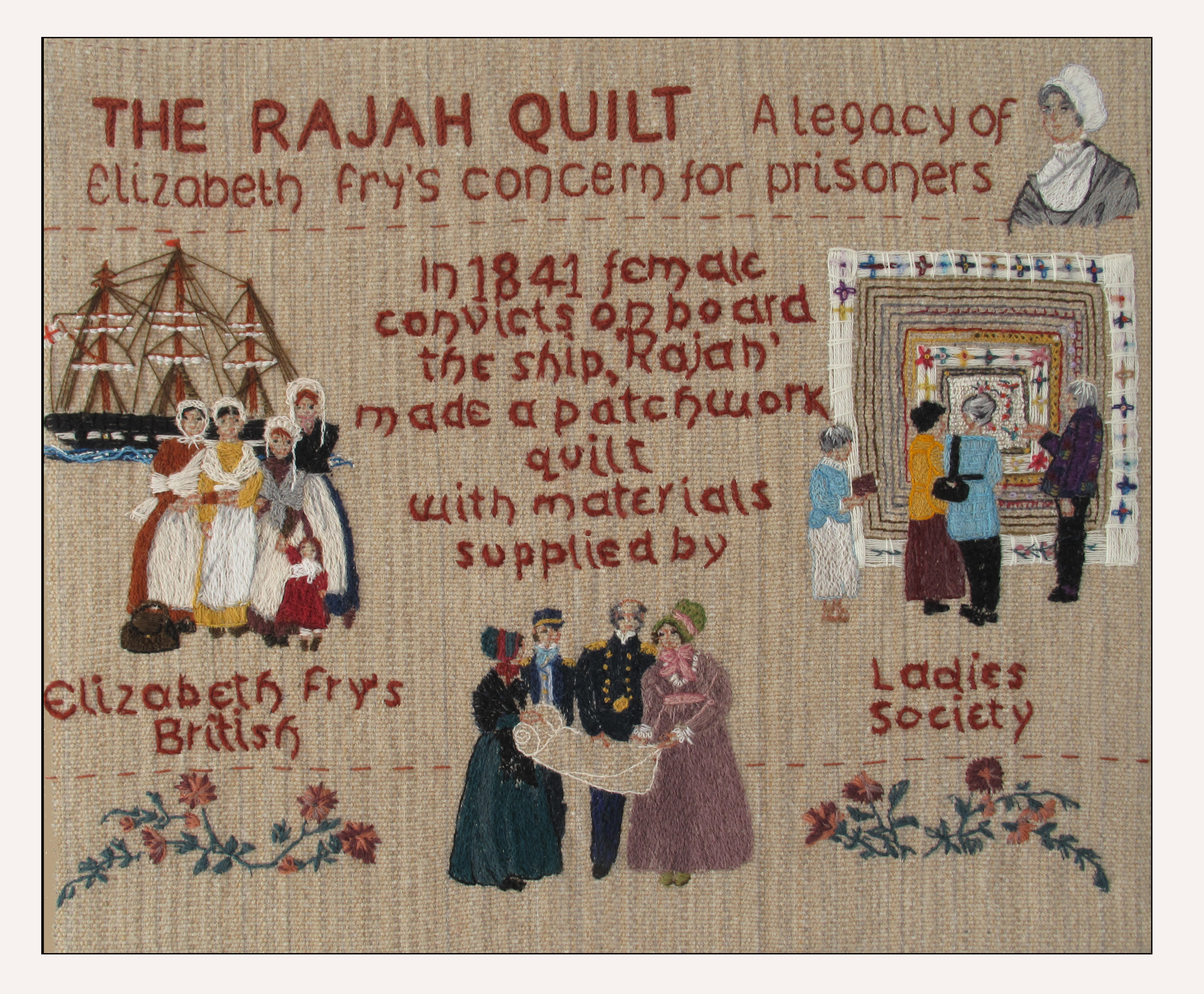 On 5 April 1841 the ship Rajah set sail from Woolwich, England bound for Tasmania. On board were 180 women prisoners each carrying a bag of provisions from which they were able to create a large quilt now known as the Rajah Quilt.

The creation of the Rajah Quilt was made possible due to Elizabeth Fry who was concerned by the plight of women prisoners. It was this concern that prompted Elizabeth Fry to form the Quaker group, ‘The British Ladies Society for the Reformation of Female Prisoners’. One of the many improvements that the Society carried out was to offer prisoners useful tasks such as needlecraft to keep them occupied during imprisonment and transportation. Prisoners on the Rajah were given a “bag of useful things” including sewing supplies, such as tape, 10 yards of fabric, four balls of white cotton, a thimble, needles, threads, pins, scissors and two pounds of patchwork pieces.

The quilt consists of 2,815 fabric pieces joined in the medallion or ‘framed quilt’ style. The section in the centre and outer area surrounding the inscription are decorated with broderie perse or appliqué chintz. Between these are rows of patchwork.  The quilt is inscribed with the following message, framed with flowers:

To the ladies of the convict ship committee, this quilt worked by the convicts of the ship Rajah during their voyage to van Dieman’s Land is presented as a testimony of the gratitude with which they remember their exertions for their welfare while in England and during their passage and also as a proof that they have not neglected the ladies kind admonitions of being industrious. June 1841.

This embroidered panel represents the presentation of the Rajah Quit to Lady Jane Franklin, wife of the Lieutenant-Governor, by Miss Kezia Hayter, from the Millbank Penitentiary. It was Hayter, sent to assist Lady Franklin in the formation of the Tasmanian Ladies’ Society, who had instigated and supervised the making of the quilt. On the left are a number of convict lasses. The panel also shows the quilt’s display at the National Gallery of Australia on the right.

NGA has stated that;

The Rajah quilt is one of Australia’s most important textiles, and a major focus of the NGA’s textiles collection. While it is a work of great documentary importance in Australia’s history, it is also an extraordinary work of art; a product of beauty from the hands of many women who, while in the most abject circumstances, were able to work together to produce something of hope.

Read more about it here

Stitched by Wilma Davison and Catherine Dabron from CRM 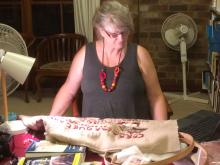